After a small (unexpected) break, I’m getting back to fortnightly updates of Make-Believe. While it’s been a while since the last post, I have been making changes to the code, so there’s a few extra things in this update. Firstly, there are some bug fixes to really silly regressions that had snuck in. As a consequence, there are also a first set of regression tests now to help make future versions a touch more reliable.

It’s possible to switch between belief bar and labelled box view. This is experimental, but should work fine. The main issue is I need to rework arrow drawing to handle different node shapes. (But it works pretty well nonetheless.) 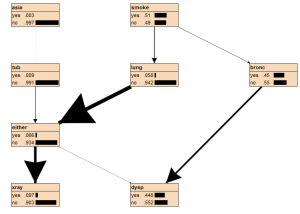 inally, a very experimental and rough visualisation under View -> Show Arc Strengths. This shows the proportion of a child’s entropy that each parent would reduce if evidence in that parent were set. This is also conditional on the current evidence in the network, which is kind of neat, because you can see (for example) the effect of evidence on d-separation/d-connection. As mentioned, it’s still experimental, so things can get a little comical with oversized arrowheads and the like. (SVG markers are not as flexible as I’d like.)

One current issue is that I’ve had to disable worker-based inference, until I’ve cleaned up a few things.