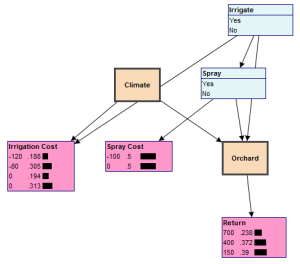 Submodels are now supported. Submodel nodes are rendered with thick borders to distinguish them from variable nodes. You need to double-click them (as per GeNIe) to open them up, and when you’re in a submodel, the parent model can be accessed by double-clicking the ‘..’ node (obviously inspired by command line navigation) in the top left corner. This is clearly not the final interface, but perfectly workable for the time-being. Also for the time-being, submodel nodes are very much view only — it’s not possible to do anything with them other than to move them about. And saving networks with submodels will simply ignore the submodel information, which I guess counts as one (temporary) way to flatten a network.

Submodels are the last major XDSL feature I was aiming to have some support for in Make-Believe. (Note that .dne support has been broken since R18, but will be revived soon.) I’ll be taking the opportunity over the next few months to focus on polish: trying to improve robustness, code legibility and ensuring that everything is properly CRUD-capable.